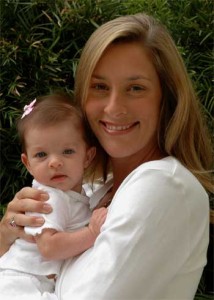 In her own right, Lisa is a miracle. But her personal recovery from alcoholism is only the beginning of what life has brought to this extraordinary young woman. She is full of gratitude. She helps other women who are trying to maintain sobriety. She’s a loving wife and a good mother.

Her life was not always this full.

Lisa was born in Knoxville, Tennessee, and she still speaks with the soft drawl of her hometown. Her childhood was uneventful—until she got drunk at age 12. “I liked it right away,” she said. “I always hated being alone, and alcohol seemed to make me part of things.”

Lisa was a pom pom girl in high school, and studied dance. But she was nagged by the feeling that her happiness was always ahead of her. “There was always something better around the next corner.”

She obtained a degree, but a subsequent move to Atlanta also increased her drinking. Lisa developed a reputation as a “party girl,” but it wasn’t enough for her. She found herself drinking before and after parties—and resenting the times when she couldn’t drink.

She met her future husband in the summer of 1999. With her relationship came the growing practice of hiding her booze. “He was such a sweet guy that I didn’t want him to know I was a lush.” She hid her drinking successfully until 2001, when she was hospitalized for alcohol poisoning with a blood alcohol level of .35. “But I was still a ‘nice girl’ so no one said the word alcoholic.”

Lisa tried to stop, but was only able to go a couple of weeks. Again and again she failed to achieve her goal—to “drink like a lady.” Lisa and her husband married, and moved to Michigan in early 2002. A few days before they moved she was admitted to a Knoxville detox for a few days. Without friends in Michigan, she tried to connect with people in recovery. She attended 12-step meetings, but was unable to stay sober. Her alcoholism progressed rapidly.

One night in Ann Arbor she awoke from a blackout to find herself parked in a shopping mall, surrounded by paramedics and police. She had passed out, stereo blaring, and the store manager thought she was dead. “I came to with a breathalyzer in my mouth.” A week later, her husband came home and couldn’t find her. Lisa was under a bed hiding, drunk.

“I hated going into the Farm Detox, I cried constantly and I wanted to leave every day. But my husband said I couldn’t come home.” Within a week, Lisa was in our residential program on Huron Street. “I was such a princess,” Lisa remembers. “I was six weeks married, and sitting in treatment. I hated it at first—but I realized that I had to do this or I was going to die.”

Lisa stayed for two and a half months—hard months of self-searching and brutal self honesty. The princess had a tough awakening. “Looking back, every suggestion helped. I sat in lots of groups, attended 12-step meetings and joined a great community of recovering people. I can’t believe how much they supported me, and how much love they gave me.”

Lisa graduated from treatment in 2002. She attended aftercare and got a job. Her marriage improved. She began to support newly sober alcoholics, sharing her own story with struggling women. Eventually a job change took Lisa and her husband away to California—and to a time of real crisis. She suffered a miscarriage, had an appendectomy, and then Lisa’s grandmother unexpectedly passed away.

“But I didn’t drink. I didn’t pick up a drink. It was amazing, but I knew deep inside that a drink just wouldn’t help. I couldn’t believe that this was possible in my life—that I could be free from booze.” Her life continues to get better and better. The tools she gained in Michigan have translated well in California. Sobriety has become a way of life for Lisa.

On June 18th, 2004, her daughter Isabella was born. “My life is so great today, and every minute with Isabella is one I would have missed if I weren’t sober.”

“Don’t sell yourself short,” she says. “If I can enjoy life without alcohol, you can too. If you have a problem, do what I did. Get some help.”