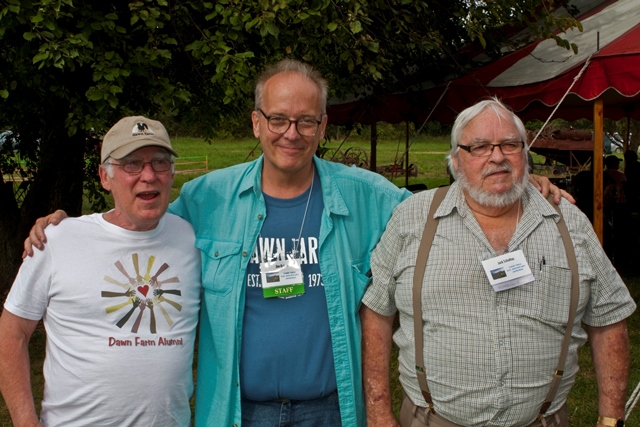 It was 1973. My friend Gary Archie had an idea. Sober since 1966, Gary had met some folks from Quebec who had started a small therapeutic community outside of Montreal—and Gary wanted to do the same.

Gary picked up Jack Scholtus and me (pictured above—40 years later—at the 2013 Jamboree) and took us out to an old farmhouse on Stony Creek Road. We were young guys in recovery, together almost every day. The three of us pulled up to a rundown dope house—a marijuana plant growing by the back door.

Gary was excited about his idea—Jack and I were not as impressed. But it’s hard to stop a recovering alcoholic with an idea. Gary had an irrational enthusiasm that has characterized all of the Farm’s leaders—including me. But he saw something I didn’t.

I took a job at the local mental health center (later joining the board), but Jack and Gary moved into the house. Dawn Farm was born.
I recently asked him—Did he have second thoughts about this venture? “Nope,” he exclaimed. “Though I guess I did wonder how we were going to pay for it.”

Paying for the Farm was a problem—in those days much of the budget was floated on credit cards. Local AA members dropped off money and bags of groceries. It was a struggle. Somebody actually gave us a cow. A local Episcopal church served as our fiduciary until we became a full non-profit.

It was an exciting time. It was a beginning.

I (Jim Balmer) took a sabbatical earlier this year to research a book about Dawn Farm, to tell the story of how our mission and values evolved and made Dawn Farm such a special place. During this time I interviewed dozens of people who played a role in our history. It was an extraordinary, affirming experience.

Over the last forty years, Dawn Farm has had four CEO’s: Gary, Jack, the late Steve Housewright, and myself. Each of us brought our own brand of vision and passion to the job. Many wonderful people have been involved with the Farm over the last four decades—hundreds of dedicated employees, board members, community businesses and thousands of volunteers. I have had the good fortune to observe the breathtaking generosity of the many people who have given time, talent and money in support of this grassroots program over the last 40 years.

Most of all, it has been a privilege to watch tens of thousands of young addicted men and women find hope at Dawn Farm.
In the 1970’s and 1980’s they lived in that funky old farmhouse, where tears were shed and lives changed. In the late 80’s we built the house we have today, where so many have found recovery.

We have never stood still. So many alcoholics and addicts have found hope at our residential sites, the Spera detox facility, in an outpatient session or a group in the jail, or in our many transitional homes. So many lives have been touched in 40 years!
We have tried to stay faithful to our roots””to recovery and community, to honesty and hard work, and to being good stewards of the dollars you give.

On behalf of all of us, THANK YOU.
Jim Balmer, President